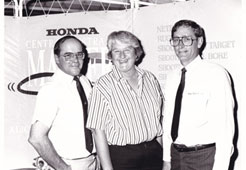 On 3 December 1985, Cabinet approved the staging of the Central Australian Masters Games in Alice Springs during October 1986 and the allocation of up to $150,000 to underwrite operational costs of the Games on behalf of the organising committee.

One of the primary objectives of such an event was to provide an effective incentive for mature age athletes to renew or maintain their active participation in a sporting discipline.

This would be the first Masters Games of its kind to be held in Australia.

Alice Springs was identified as a suitable venue because of climate and economic advantages.

In particular, new visitor markets and attractions were required to support the substantial increase in accommodation capacity recently developed throughout the Northern Territory, and the Tourist Commission identified sport as providing the potential for a substantial impetus to visitor growth patterns.

Further, the staging of the Games in October 1986 would serve to attract additional visitation to the Territory during a ‘shoulder period’ of the tourist year.

The Games were expected to embrace around 12 different sports and involve approximately 2,000 competitors, including 300 locals.